I have been practicing naturopathic medicine for 10 years.  I have three wonderful children.  And they all have sensory issues.  You would think with 10 years of experience as a DAN! doctor and FMAPS candidate, that I would be able to pick up sensory issues very easily.  My practice is focused on prevention and treatment of autism spectrum disorders and 90% of children with autism have sensory issues.  The truth is, identifying sensory issues is very hard, especially when they are the underlying cause of behavioural issues.  So let me tell you my story…

I grew up with “crazy aunts”.  I feel bad now referring to them that way but as a kid it seemed crazy that that chewing anything crunchy was forbidden at family parties.  The sound of chewing upset my aunts, and mother so much that we avoided it or were very careful about how loud we were eating.  I didn’t realize until much later that this is a sensory issue.  When I was applying to CCNM, the naturopathic college in Toronto, I asked my sister to have a last look over my essay.  She was already training to be a naturopath so I eagerly looked over her shoulder while eating my cereal, waiting for her input.  Well, she freaked out because I was chewing in her ear.  I mean, she was ANGRY!   And as we argued, my uncle started laughing.  “Didn’t you learn to let the cereal dissolve in your mouth before swallowing so you aren’t making any noise?”  We thought he was teasing us, which he was, of course, but not entirely.  He had grown up with 4 sisters.  Sisters that couldn’t bear the sound of chewing.

Fast forward a few years.  I am pregnant with my first child.  I am married to the man of my dreams but if I have to go to another movie with him and hear the crunch of popcorn, I might lose my mind! My sensory issues got worse during pregnancy.  As a kid, I had issues with clothing, tags etc.  My mom’s favourite story is how her 30 staff all bought her dresses that I refused to wear because they made me so uncomfortable.  I got used to my sensory issues and modified my life to accommodate.  To achieve the right level of alertness so I would feel uncomfortable.  So our wonderful son is born.  He is fussy, colicky, doesn’t sleep long, startles easily.  Sleep deprivation and stress send my sensory system into overdrive.  Certain clothes and sounds now scramble my brain.  You would think with a family history and my own person medical history, that I would have been able to diagnose sensory tantrums in my toddler easily. You would think that working with over a thousand children with autism would make it easy to see sensory aggravation as the trigger for extreme behaviours; but sometimes parents have difficulty seeing what is right in front of them.  Guilt, fear, worry, anger, exhaustion.  When children have sensory pain, they often act out.  Sensory pain can be extreme.  It often results in extreme behaviours.

When my son was 2 years old, he began having unreal tantrums.  Loved ones and relatives said all the normal, supportive stuff.  Boys will be boys.  Tantrums are normal.  Little kids, little problems.  Wait until he is a teenager.  It will pass.  It is just a stage.  Well, although well meaning, they could not have been more wrong.  My son was experiencing sensory meltdowns.  I remember sitting on the stairs, with a newborn daughter , watching him kick and scream in the foyer because I told him to put on his socks.  It was a surreal moment of clarity that can come from months of stress, fatigue, worry and helplessness.  I remember thinking “what could be so hard about covering his piggies with a cotton polyester blend.  Then it hit me.  There is something that WAS harder than putting on those socks.  It was easier for him to scream and yell than to put on those socks.  Because the socks hurt his brain.  They hurt his brain so badly that he would do anything to avoid putting them on.  Once it hit me, I saw it everywhere.  I saw it in his “obsession” with wearing shorts no matter what the weather.  In his refusal of all shirts except his 5 superman tees.  I saw it in his bed time routine that would end in tears if all 8 blankets weren’t completely squared off and smoothed out.  His hyperactivity, once assumed to be my genetics, was a sensory response to too much noise or commotion. 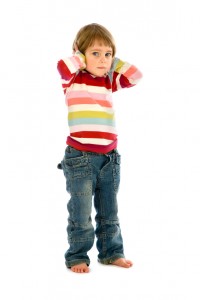 Once my mommy/ND brain saw the sensory issues, I stopped seeing the behaviour.  I saw my son in pain.  Extreme pain.  Desperate to tell us.  Desperate to stop it.  Feeling helpless because his brain couldn’t deal with the sensory overload.  It brings me to tears now to think of how much discomfort he was in.  Of how many hours he spent screaming.  It was then that we started biomedical treatment.  Before that time, I thought biomedical treatment was for autism.  It would help other issues like ADHD but it was mostly to help recover children diagnosed with autism.  Now, my view is this.  If your child has sensory issues, they need biomedical treatment.  They have a medical issue that is treatable.  If you are lucky enough to have a child who only has sensory issues, you can expect dramatic improvement with biomedical treatment.  If your child has autism, peeling off the sensory layer will open a world of opportunities including language, social and cognitive gains.  Today, my son still has preferences on what he will wear.  We try to be really cautious about forcing him to wear anything that is upsetting him but he is able to wear most clothes and fabrics without issue.  He doesn’t like snow pants but he loves playing in the snow so he can handle it.  He no longer gets extremely hyper when his auditory sensory system is aggravated.  Biomedical treatment has helped his extreme sensory pain and as a result, we don’t have extreme behaviours.  Our house no longer revolves around his sensory dysfunction.  Mild sensory issues can have a major impact on quality of life.  Major sensory issues can shut a household down as the child in pain does everything in their power to deal with their overwhelmed sensory system.

How can you identify sensory issues in your kids?   Below is sensory input broken down by sense with some examples of what impairment may look like if sensory processing in a certain system is impaired.